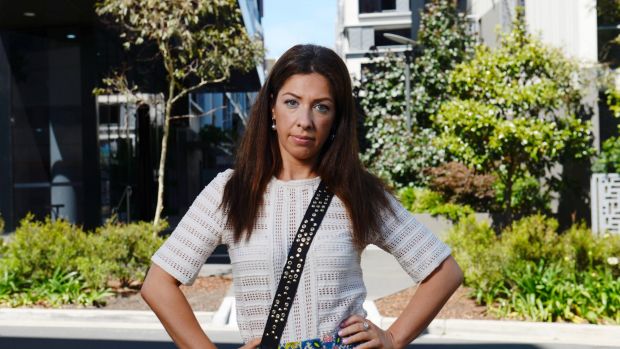 Liana Levin says she felt as if she was evicted from much of a suburb not just an apartment.

For nearly three years the working single mother-of-two’s life was tied to an apartment in Zetland, an inner eastern Sydney suburb in the heart of the major urban redevelopment of Green Square.

Childcare was downstairs. Her separated partner lived across the road.

But in April this year Ms Levin was served with a no grounds eviction notice compelling her to vacate her property within 90 days.

“They said they didn’t have to give a reason,” she said. “It was horrible for me as a single mum; it affected the kids; their father; everyone.”

The state opposition will on Wednesday promise that if it wins the 2019 state election it will end no-fault evictions.

Tenants’ rights groups and legal centres say a landlords’ ability to evict people from a property within 90 days can follow complaints to landlords or requests for maintenance.

“It’s time people in the rental market are looked after and we are making that commitment – NSW Labor will give renters the certainty and stability they deserve,” said Opposition Leader Luke Foley.

Labor’s policy follows a resolution of its state conference and will develop a list of reasonable grounds on which a landlord may evict a tenant and cap rent increases at once-yearly intervals.

Once a tenant’s formal lease has expired, Labor argues there are “limitless opportunities” to increase their rent, which can be “misused to force tenants out of properties”.

“A third of people are renters and more people are making the decision to do so long term,” Mr Foley said. “But they don’t want the option of a landlord evicting them […] hanging over their heads.”

Ms Levin believes her eviction notice followed complaints to her landlord – property developer Meriton – about a $50 increase to the rent on her two-bedroom apartment and earlier emails in which she complained about the landlord “increasing our rent four times from $290 in May 2014 to $750 in June 2016”.

Meriton replied saying it was slowly bringing the property’s rent up to market value.

Meriton said Ms Levin was served the no grounds notice because she was not on the apartment’s lease – something she acknowledges occurred after her ex-husband moved out – and was offered to re-apply to rent the apartment at a new market rate of $840.

After an exchange of emails to the company pleading to let her remain in the apartment through the end of the year, she claims a Meriton employee told her “she shouldn’t bother” applying for other properties owned by the company, which she says limited her options in a suburb in which the company has developed 10 apartment towers.

“Meriton denies the relevant property manager said the words claimed by Ms Levin,” a spokesman for the company said.

“In no way was Ms Levin ‘blacklisted’ from Meriton apartments.”

Meriton also said it offered to show her other similar units in her budget, an offer they said she declined.

Labor says it will also extend the length of tenancies by making yearly agreements the default minimum term (replacing leases as short as six months) and work with agents and renters to develop options for leases as long as five years.

Between January 2016 and May 2017, NSW Fair Trading received 278 complaints about termination of tenancy, including perceived unfair termination and retaliatory eviction, “due to the tenant either seeking repairs or maintenance … or [eradication of] mould”.

But the Better Regulation Minister Matt Kean accused Labor of hypocrisy and said that it previously stripped tenants of the right to argue against terminations at tribunals in 2010, when it was in government.

“My focus in the coming months will be to look at ways to make life better and fairer for NSW renters,” he said.

The minister said he was considering a fairer lease-break fee for tenants, improved rights to repairs being undertaken, better disclosure requirements prior to a tenant signing a lease and protection of tenants’ rights to photos of their properties.

“I look forward to having more to say about these important reforms in the near future,” he said.

The state government has recently developed a taskforce looking to grow the “build to rent” market in NSW, which would have investors build apartments to lease on a long-term basis, instead of sell them for quick profits.

This story was found at: http://www.smh.com.au/nsw/evicted-and-blacklisted-tenants-like-liana-levin-prompt-rental-reform-proposal-20171024-gz76p0.html